Be Blessed: The next time you groan — stop and listen. You just may hear angels singing. 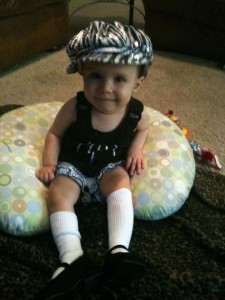 Koutiala It was still dark one morning last month, when Jennifer Dempsey was awakened by the sound of her infant daughter babbling away happily in her crib.  Rolling over, still half asleep, she checked her clock and  saw that it was only 5 a.m.  Like any overtired, sleep-deprived parent, who realizes that her precious (and necessary!) sleep was being cut short by a baby who can’t yet read the time, her first reaction was to groan at her groggy misfortune. Until the fog cleared and she realized that the sound she was hearing  from the next room was nothing short of miracle.  You see, not too long before, Jennifer had been told by doctors that Joss might never talk at all.

Joss was born in May 2011 to Jennifer and her husband Michael, after a healthy pregnancy and uncomplicated delivery. Joss’ first two months of life were perfectly normal and all seemed well until July when Joss began to have seizures.  Her little body would stiffen, curl up, and she would cry out in pain. The doctors who attended to Joss felt that the seizure-like activity was related to reflux she was experiencing.  She was treated mainly for gastro-intenstinal issues and for a while, the treatment appeared to work.  However, over the course of the year that would follow, the number and the intensity of Joss seizures increased rapidly and markedly. She began to fall behind developmentally, and at 11 months she was still not sitting up independently.

This past April, Joss had a terrible seizure episode. Jennifer brought her back to a neurologist — and they found through more intensive testing that Joss’ brain was malformed — the left side of her brain being much larger than the right, a condition that results in epilepsy. The seizures it appeared, were coming from the left hemisphere. As the seizure activity continued to increase it became clear to her doctors that without intervention, the seizure activity would move from her left to her right hemisphere, overtaking her brain function and making it likely that she would never walk or talk.

Her doctors recommended something that makes the mind reel. A surgery called a hemispherectormy in which the “bad” half of the brain is completely removed.

On May 31st, Jennifer wrote:

After consulting with Joscelyn’s doctors last week, we have made the unthinkable decision to go forward with the hemispherectomy. Sometime in June, our precious baby girl will check into the hospital and have half of her brain surgically removed . . .

Ideally, once the procedure is done, her right hemisphere will (hopefully) take over many of the functions and responsibilities of the missing left half, allowing her to learn to walk, talk, read, write and even drive. Doctors do not expect and significant impairment of her cognitive function. Indeed, I’ve read many stories of other “hemi-kids” who have gone on to graduate high school and college and lead normal, happy lives.

And so on July 5th, at the age of 13 months, Joss underwent a radical and life-altering surgery. Doctors removed the left brain with the hopes that her right brain function would overtake the function that her left brain was designed to perform.  That she would be able to walk.  And to talk.

Two months later, Jennifer was woken in the wee morning hours by Joss’ babbling. And she almost groaned. And then she realized she was listening to music. Blessed, beautiful music. Like angels singing. Like one sweet angel singing. Only better. Because just a few months before, she wondered if that angel would ever sing.

Reading Jennifer’s post on Facebook about her early morning revelation, I was in tears thinking about how so many things that we groan about are, in fact, blessings of the highest order.  That sink that is constantly dripping? That’s because you have clean, running water (780 million people worldwide lack access to clean water; 3.4 million people die each year from water-borne illnesses). That drafty house that has lost value on the market? That means you have a home (it’s estimated that in America, approximately 1.6 million people are homeless). The job that is relentless? The friends you can’t keep up with? The children who roll their eyes and won’t pick up after themselves? Work! Income! Friends! Children!  Blessings by the oodles! Wow!

These blessings aren’t perfect, of course. Sinks leak. Houses lose value. Rooms are drafty. Jobs are exhausting. Friends can be demanding. Children can be ungrateful and disrespectful.  Of course, it’s all true.  And I’m not saying don’t ever groan. You’re going to groan. Or at least you’ll feel like it.

But I have a proposition. In the meditation practice we use in our home, we have something called a “mindfulness bell”.  It’s a simple bell we ring to remind ourselves to stop where we are, take three breaths, and experience the world anew, with fresh eyes and hearts.  The bell is like a friend that gently but persistently encourages us to see our world for the miracle that it truly is.

Anything can be a mindfulness bell.  A ringing phone. A doorbell.  A dripping faucet.  A draft through a window.  The petulant sigh of a teenager asked to pick their coat up off the floor.

Or a baby that babbles joyfully at 5 a.m.

Each of these sweet chimes is a call from the universe to wake up and re-experience the world as miraculous and our livea as abundant with blessings. So the next time you hear such a bell in your life, take three breaths. Calm your mind. And listen (listen, listen)  for the sound of angels singing.

For more on Joss’s journey, you can visit Jennifer’s blog here.