Saying Goodbye to Bingo: A Life Lesson in Letting Go of Life

by Lauren Rosenfeld | Oct 9, 2012 | be blessed, be caring, be compassionate, be connected, be loving, Uncategorized | 0 comments

San José del Cabo I.   Our family had a special voice we used in order to talk on behalf of our dog, Bingo. “Bingo’s voice” was high pitched and raspy — a sort hybrid of whininess and spunk. A blend of his adorable neurosis mixed 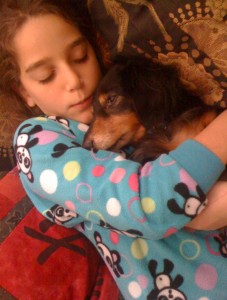 Bingo with our daughter on a snowy morning a few years ago, doing what he did best: snuggling.

with his unstoppable joie de vivre. It turns out that (at least in our family’s imagination) Bingo mostly wanted to talk about cheese. Whatever the conversation, we imagined that Bingo always tried to steer it back to the topic of cheese.  Bingo had a special feeling for cheese. You could wrap about any pill or vitamin supplement in cheese and Bingo would eat it in one swift gulp. I never quite understood why Bingo liked cheese so much; frankly, I don’t know how he even tasted it: It seemed to barely graze his tastebuds before he swallowed it whole (then wait smiling and panting for what he hoped would be his next dose).

Bingo would call me by my family nickname: Missy (sometimes when my husband, Jamie talked for Bingo, I would have to remind “Bingo” not to get sassy with me.) Jamie and I had a running joke: if I said, “I love you, Bingo,” he would answer in his Bingo voice, “I love you, too, Cheese … I mean … I love you, too, Missy.”

Last night, we said goodbye to Bingo for the last time. My husband and I took him to the vet’s office and we held him and cried over him as the vet injected a strangely cheery-looking pink liquid into a vein in his front leg. As I held him, I watched as his tongue turned from pink to purple. I realized my tears were splashing on the vet’s arm. I leaned in and kissed my dog’s soft ear. “I love you, Bingo,” I whispered to him.

“I love you too, Missy,” a voice answered to my heart. Bingo’s voice.

http://unasttropez.com/wp-json/wp/v2/pages/725 II.    Many years ago, my father — who was a newspaper editor and weekly columnist — wrote a column about the death of our family’s dog, George. In the column, my dad talked about the photograph of the moment I first saw George when I was eleven years old (“Her 11-year-old face is a study in delight and surprise,” he mused) and how the two of us cried over him at the end of his life in the vet’s office when I was twenty-two. “George would have been 11 in a few days,” my father wrote, “my daughter’s age when the picture was taken, but now he was an old man and she is still at the start of life.” I remember that moment in my father’s arms in the vet’s office — how we held one another and cried. It was the first time I heard my father sob. I would hear him sob again a decade later when we stood together in the basement of a funeral home in Atlanta, when he was asked by a polite and compassionate funeral director to pick out a casket for my mother.

Nine years after my mother’s passing, I found myself sitting at my father’s bedside in ICU with my brother and my sister-in-law. My father was in a coma and his life was leaving his body. I held his hand and watched as his fingertips turned from pink to purple.

When my father released his last shuddering breath, my brother and sister-in-law and I fell into one another’s arms and sobbed. And though we all felt as though we were free falling in abyss of grief, we managed in our falling to lean into  one another. And we miraculously held one another up. That is just how love works.

best online pharmacy to buy accutane III.    Last night before Jamie and I left the house with Bingo for the last time, we spoke with our children. We told them where we were going and why. We had prepared them for the possibility of this days ago, but the finality of the decision broke their hearts. And ours. We all cried together.

I told them they all had time to hug Bingo. To tell him goodbye. To share what was on their hearts. To let him know how much they loved him. How much they would miss him. To thank him for the joy he had given them. “Say what you need to say to him,” I told them, “I don’t want you to regret that you didn’t get the chance to really say goodbye.”

Just before Jamie and I left for the vets office, I had one more thing to say to my children, “You’re going to feel very sad when we leave. It’s okay to cry. You have to lean on one another. If one of you needs a hug, be sure to give it to them. Don’t go off in your separate rooms tonight looking for distractions. Don’t run away from your sadness.”

“Try to stick together, tonight,” Jamie added, “You’ll need each other.”

As Jamie and I drove home from the vet’s office, I realized that the instructions that we gave them for coping in our absence as we took Bingo to the vet’s office to be put down for his final sleep were the same instructions that I want them to remember when someday they have to say goodbye to us as we go to our final rest and as they cope with our worldly absence: Say what’s on your heart. Cry. Hold one another. Lean on one another. Stick together. You’ll need each other.

And so perhaps it is a good thing that our animals age so quickly. That they become old and tired in such a painfully short amount of time. They give us practice in letting go, in saying goodbye, in letting tears flow, and in expressing love. In collapsing into one another’s arms. In holding one another up. And in realizing that though bodies may age, decay, and pass from existence, Love itself never dies.

Thank you, Bingo, for everything. Even in your final moments of life, you taught us how to live.