Be The Answer: Alec’s Story (or “The only answer to a prayer I ever needed”)

I’ve been an educator most of my adult life.  Over the years I’ve seen many children whose small and innocent lives were consumed with anger and depression — traumatized by violence, deprivation, and untenable circumstances. But, there was one boy who was by far the saddest, angriest child I had ever met. And there was one other important distinction that made his case more compelling than any of the others I had encountered:   Irinjālakuda He was my son. 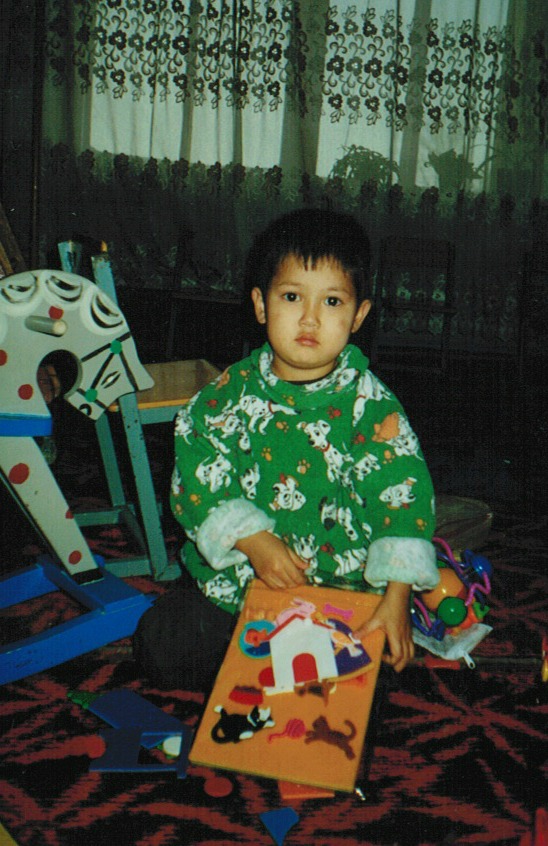 My son, Alec, when we met him in Kazakhstan at the age of almost 4

When Alec came home with us in 2001, he had already spent the first three and a half years of his life in an orphanage. What’s more, his medical report indicated that in the first year of his life, he had been hospitalized ten times for pneumonia and other upper respiratory infections.  His early life was a long tale of separation, fear, pain.  It’s not that his caregivers weren’t excellent. They were. It’s one of the reasons we chose to adopt from Kazakhstan. But his early life was so difficult and traumatic. How could a child so small overcome such huge emotional obstacles as suffering, loneliness, and distrust?

I was already an experienced mother when we adopted Alec (and his brother Askar) from Kazakhstan. My husband and I already had two biological daughters, ages 5 and 1. I also had a Master’s Degree in Education, specializing in early childhood development. I thought I knew what I was doing. To the world I seemed an expert in the field of parenting. But Alec made me question everything I knew and what value any of it held when parenting a hurt child. When he first came home, he was throwing 10-12 biting-hitting-kicking-pinching-screaming tantrums a day. Tantrums that required me to ignore my other three children until the storms of his unmanageable emotions had passed. I was — as you can well imagine — a complete wreck.

But it wasn’t the tantrums that caused me the greatest grief. It was that this child — who had been separated from his biological mother at birth by socio-economic circumstances beyond his and her control; and then separated again by his caregivers at the orphanage by illness — appeared not to know how to love or trust. The tantrums I could handle.  Exhausting as they were, they had a starting and a stopping point. But loving a child who did not know how to be loved — that was a pain that followed me around day after day. Haunting me. Pouring love onto Alec was like pouring water into a cup that was turned upside-down.  It appeared to fall away into nothingness.  And every day I felt my own heart was emptying, drying up, and breaking.

On one particularly difficult day, I was driving in my car, returning home at dinnertime from a last minute dash to the grocery store.  At least that is what I told myself.  My husband came home from work and I told him I had to run out to the store. In truth, I just wanted to be alone in the peace and quiet of my car.  I was worn to the bone and I felt in the pit of my stomach a certain dread in coming back to my own home. Home was hard.  I felt inept at the job that was supposed be — and had previously felt — intuitive.  I felt ashamed of myself for not wanting to be at home where my family waited for me. I was wrapped in knots of guilt, fear, and failure.

As I headed slowly west on the road for home, the sun began setting.  The sun a bright orange orb surrounded by an impossibly brilliant, pink glow, draped in the blue of the day that was ending.

The inside of my car was bathed with the pinkish orange light of the sun’s rays and I burst into tears and opened my heart in prayer. “Dear God,” I begged, “Open my son’s heart. Teach him to love and to receive love. Help him experience wholeness and happiness. Help him God. Heal him.”

where to buy accutane in australia That is why I sent you.  You are the answer to everything you’ve prayed for.

And suddenly it felt as if the light that filled my car had filled my heart. Everything was aglow. Peaceful. Clear. As if it had all been settled once and for all.

And then an image appeared to me. A young man with close-cropped black hair. He was wearing a dress shirt with a crisp collar. I thought I saw the sweet blue of the upper vault of the sunset-sky draped peacefully around him. His tanned face was stretched in a broad, warm smile. There was something so genuine about this young man. He was laughing with such ease. Standing with such self-assurance and confidence. He radiated kindness and compassion. I recognized him immediately. This was Alec. My son. Loving. And beloved. Healed and whole.  I wiped away my tears and drove home with a profound sense of purpose.

If I told you that everything changed that evening, I would be lying. There would be many more tantrums. Many more attempts at pouring water into that overturned cup. But I had an answer to my prayer. And I had my Divine marching orders: I was sent to turn that cup over. So that night I walked into my home that evening filled with hope. Knowing that I was the channel for the love, the healing, the wholeness, and the happiness he needed to become the young man I envisioned. I did not do it alone. There were family members. Neighbors. Friends. Healers.  People who were wise and kind and loving and patient. We were a community of faith answering a call to love and heal.  And then at the center there was Alec, who it turned out had the strength and the courage of thousands and a love in his heart that was beautiful and pure, simply waiting to be born. 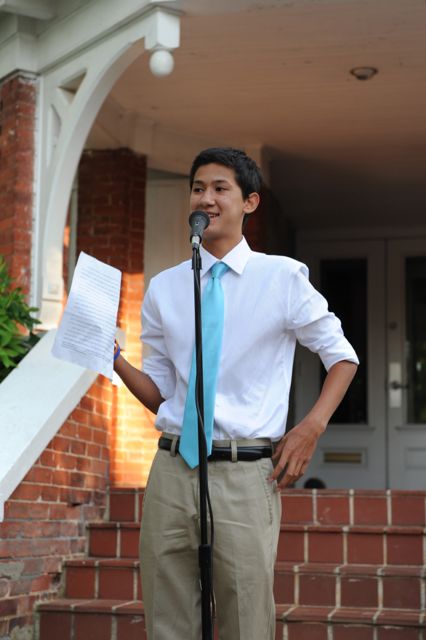 Alec in his sky blue tie at 8th grade graduation

Last month, Alec graduated from the private school he had been attending since he was ten years old.  In preparation for the evening, his sister, his brother and I took him  shopping for clothing for graduation night. Alec chose a dress shirt with a crisp, white collar. His little sister picked a tie off the rack and held it up for him to see. It was the sweet blue of the upper vault of the sunset sky.  “I like this one for you, Alec,” she said thoughtfully, handing to him with love and admiration,  “I think the color suits you.” He smiled at her and took it from her hand and draped it around his neck, “What do you think, Mom?” he asked. I just nodded and gave him thumbs-up.  I couldn’t find the words to tell him that I had already seen him in that tie — and yes, it suited him beautifully. Perfectly.

A week later, Alec delivered his speech to a crowd of over one-hundred students, their teachers, and their parents. He talked about his gratitude for the support he had received and the friendships he had made.  He talked about the fact that he had grown to become a leader. He talked about his confidence that he could accomplish anything he set his mind to. 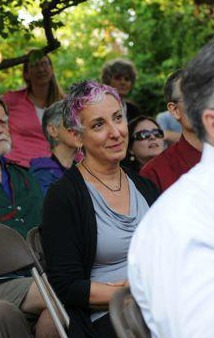 A friend snapped this photo of me at Alec's graduation.

And I of course sat and cried like a baby. Because as everyone in that audience saw a tall, handsome, self assured, happy, kind young man — I saw another boy, too.  A little boy — angry, hurt, and at sea in an ocean of emotions that he was ill-equipped to navigate on his own. I saw a river of Divine Light connecting these two boys.  And I knew that they were one in the same — and had been from the very beginning. One within the other, waiting to reveal himself to the world.

I cried because I knew my prayer had truly been answered.  And I thanked God for the blessing of being the answer to that prayer.

Dedicated to my son. My hero. With love. If every person on earth had your courage to journey to love and embrace it as you have, this world would be a very different place.