Be Joyful: A Missing Diamond is Cause for Celebration

I was at a meeting in a local coffee shop when I saw it. Or rather, when I didn’t see it.

The diamond from my engagement ring. The symbol of undying love and commitment that I have been wearing every day for nearly two decades. Gone.

At first I thought maybe my middle-aged eyes were playing tricks on me. Perhaps it was a mirage created by a combination of the brilliant, overhead spotlights in the café and the fact that I was not (as usual) wearing my bifocals. I held my hand out at arm’s length, squinting. 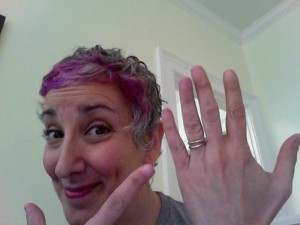 My emtpy ring setting: In Buddhism, emptiness represents the ever-changing fullness of life

My friend asked me if anything was wrong. “I think the diamond is missing from my setting.” I said moving my hand toward her in hopes that her eyes might deny what mine were confirming. She leaned in and frowned. “Shoot,” she said.

For a moment my heart sank. I had already covered a lot of territory that morning. Up early to get the kids ready for school. Out to walk the dog. Showered. To the grocery. The possibility of my finding it seemed next to nothing.

So just to be clear: We’re not talking about a big rock here. This was a ring that my husband bought for me when we were both in graduate school. We had only known each other for four short weeks when he offered it to me over a simple Italian meal on Valentine’s day in 1993.  We were both pretty poor. When he bought the ring, I reached into my purse and offered to pay for half. It seemed too much to ask a guy I barely knew to shell out so much money for a diamond ring for me. I told him I didn’t have the money just then, but I could owe him. I was dead serious. Which made him laugh. It was just the beginning of the memories we would go on to build together.

After my meeting yesterday, I sat in my car and held the empty setting in my hand and thought of what it represented. In Buddhism, “emptiness” represents the fullness of life’s every-changing possibility. To me, the fullness of our lives together is represented by sacred space between us — the very space in which an unlikely love blossomed almost twenty years ago. The space  into which four beautiful children later arrived and were welcomed with eternal love. The space in which we have loved together, celebrated together, cried tears of joy and grief together. The space into which we continue to grow each and every day.

Perhaps an empty setting is the most fitting of symbols, like a small golden hand cradling the beautiful, open possibility of our lives together.

I texted Jamie from the car, “I lost the diamond from our engagement ring.”

A minute later, the message alert dinged, signaling his reply:

“I guess we will just have get married again.”

You know what? I think I’ll forget the diamond and keep the text.

Or better yet, I’ll just celebrate the love it all represents.

I love your response to this. I love James’ response. I love this story! Thank you for sharing!

He’s a great guy, Kyra. The real treasure is him. I’m a lucky gal.